The Gibson Les Paul  stands as one of the most widely played and recognisable guitars ever. First marketed as the Les Paul model in 1952, the Les Paul evolved in the ’50s until the design was replaced by the SG in late 1960/1. Up until 1958, the Les Paul models sported a gold metallic finish, and guitars from this era are collectively referred to as Goldtops. Goldtop Les Pauls are becoming sought after by collectors, and each production year showcases the innovations made by Gibson throughout the decade. This model is quite basic, and has the wraparound stud tail piece that proved more sturdy than the trapeze tailpiece that came with the early 1952 models. This wrap job is called a combination stud bridge/tailpiece, and was commonly used by end of 1953. Not long after this, the separate bridge/tailpiece was introduced that overtook the use of the wraparound. The LPs with a trapeze tailpiece are considered less desirable to collectors. The guitar sports a Single cutaway solid-body, Mahogany, Maple top, Mahogany neck, Rosewood fingerboard. Two single-coil P90 pickups, trapezoid inlays, Kluson tuners, four control knobs, three-way pickup selector, white pickguard, bound fingerboard, stud bridge/tailpiece . 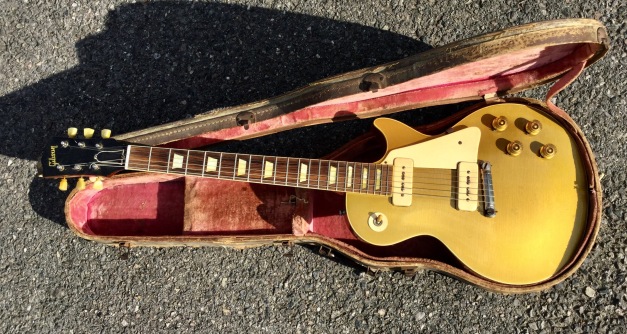 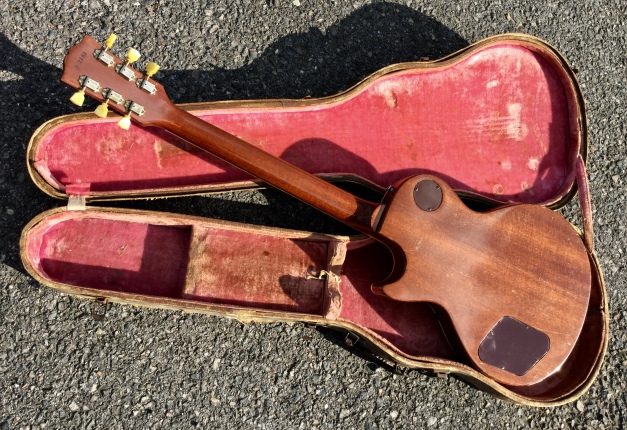